FORWARD FROM SHROC20: ADVANCING THE FIGHT FOR HUMAN RIGHTS

We must not seek out political expediency and sacrifice any part of the whole for easy wins, or a seat at the table, or a hand out.

The 20th anniversary of the Southern Human Rights Organizers’ Conference (SHROC20) was held at Tougaloo College near Jackson, MS on the weekend of international Human Rights Day (Dec 9-11). OHRD served as one of the conference co-hairs. Yolande Tomlinson, director of education and applied intersectionality, delivered the following statement at the opening press conference on December 9. Below are pictures from the conference.

This year marks the 20th anniversary and 10th convening of the Southern Human Rights Organizers Conference. SHROC has been at the forefront of advancing a contemporary domestic, U.S. human rights agenda since its founding in 1996 by movement artist and revolutionary extraordinaire, Jaribu Hill.  The SHROC agenda takes seriously the words of W.E.B. Dubois that as the South goes, so goes the nation.

The conference theme, “Forward Ever, Backward Never: Advancing a Global South Agenda for Human Rights,” is both a call to build on the legacy of past freedom fighters and movements. It’s also a battle cry to remain uncompromising in our demand for human rights for all. It aims to make plain that when we talk about the South, we must include the Global South.

So much of what we are fighting here in the U.S.–imperialism, colonization, capitalism, patriarchy, heterosexism, xenophobia, and more – are global struggles that are birthed here in the belly of the beast. They are then exported out to be used against our brothers and sisters in Africa, the Caribbean, Asia and Southeast Asia, South and Central America, and Palestine and other parts of the Middle East. Alternatively, these tactics of repression and domination are developed on our families in the Global South and brought “home” to be used against us, oppressed peoples in the U.S.

In the tradition of Fannie Lou Hamer, SHROC has been unapologetic about its politics long before being unapologetic was cool. Still now, in 2016, SHROC continues to be uncompromising in its values and commitment to uplifting a radical, intergenerational human rights agenda that is rooted in anti-capitalism, anti-colonialism, anti-imperialism, an anti-white supremacy. As we have grown, we recognize the need not just to be pro-women, but to explicitly name PATRIARCHY, the system of male supremacy and domination that sits at the root of gender oppression. Hetero-patriarchy is the same system that underlies homophobia and transphobia, and is, therefore, the reason we must and will continue to advance the rights of all oppressed peoples—Black, Brown, Indigenous, immigrant, LGBTQ, youth, elders, disabled—because it will be all of us or none. 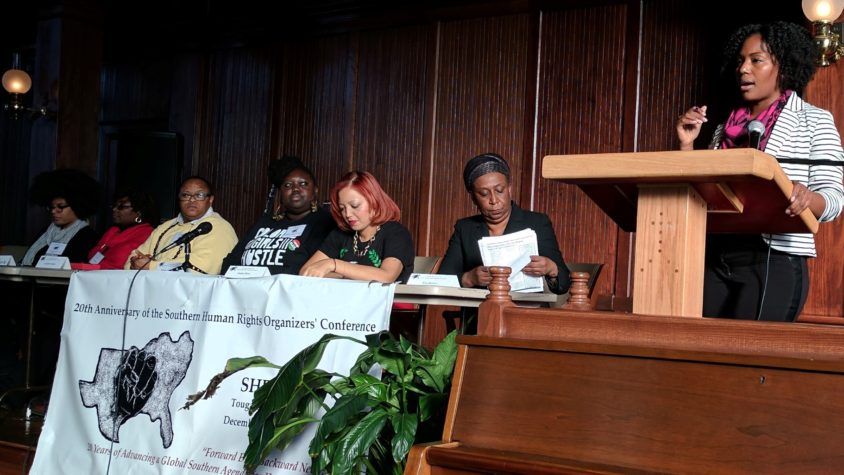 As we celebrate 20 years of strategizing, community building, movement artistry, and the vision of a bold, extraordinary Black woman, Ms. Jaribu Hill, we must also recommit to defending the full spectrum of human rights. We must commit to being accountable to our communities and each other. We must recommit to revolutionizing the values that stitch together our social contract. 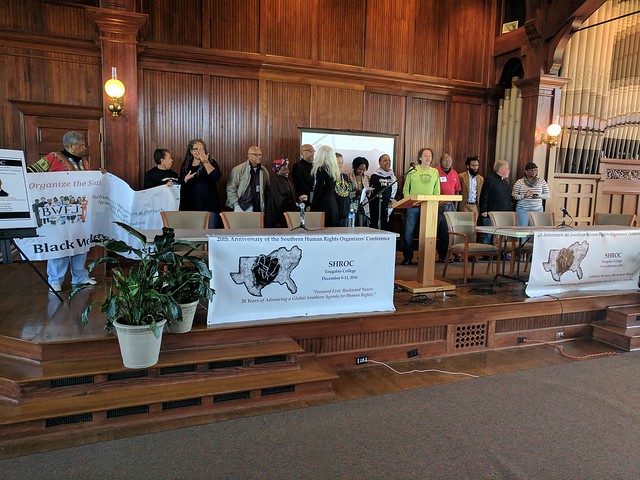 Donate to the Organization for Human Rights and Democracy